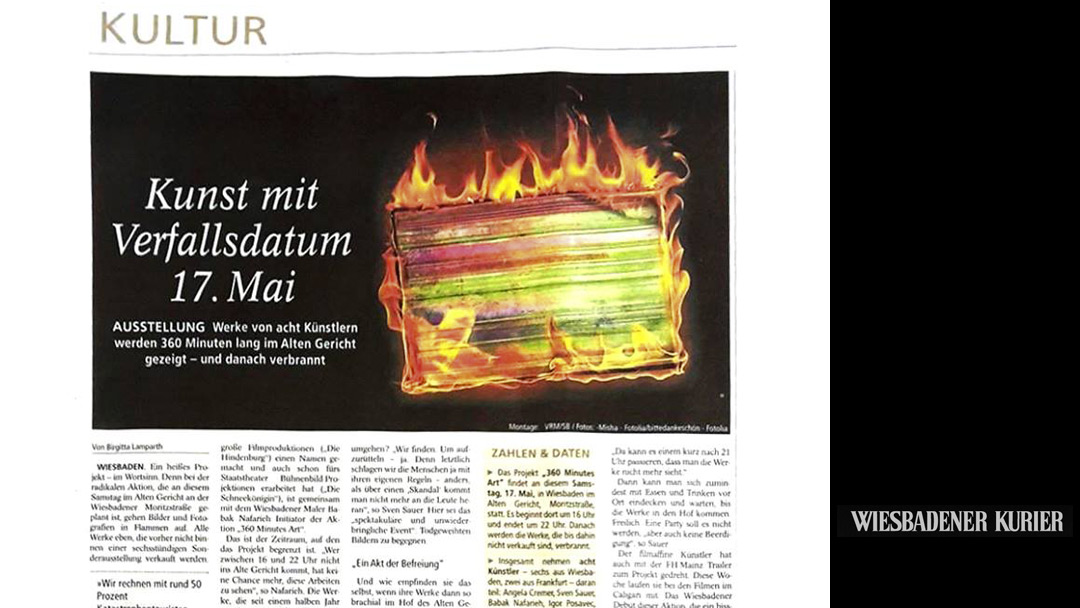 WIESBADEN – A hot project – in the literal sense. Since the radical action that is scheduled this Saturday at the Old Court at the Wiesbaden Moritzstraße will let images and photographs go up in flames – namely all works which won’t be sold within this special six-hour exhibition. “Art will burn” is the topic of this project, which kicked up a discussion – about perception in general and about perception of art in particular.
“With today’s sensory overload, we are especially guided from wanting to not miss anything. This is just the point where we want to start from,” explains Sven Sauer. He is a Wiesbaden artist who made himself a name mainly as Matte Painter for big film productions (“The Hindenburg”) and who also elaborated stage-image projections for the Wiesbaden State Theatre (“The Snow Queen”). Together with the Wiesbaden painter Babak Nafarieh, Sven Sauer is initiator of the action “360 Minutes Art”.
The name of the action tells the time period to which it is limited. “Anyone who won’t be at the Old Court between 4 and 10 pm, has no more chance to see the artworks,” says Nafarieh. These artworks have been created specifically for this project over the last six months by eight participating artists. The exhibits may not be photographed: So the images live further only in the minds – that’s the conceptual approach.
This is one of the six rules which Sauer and Nafarieh have established for the exhibition. This also includes that there won’t be any artworks which have already been shown in other exhibitions: “The artworks we will show are no remnants” says Sven Sauer. And there won’t be any price reduction on these uniques – not even the farther the time advances further. The images can be saved from the burning only by buying. They have usual market prices between 650 and 4000 euros.

May art be treated like that? “We think: In order to arouse – yes. After all, we beat the people with their own rules: Anything else than a ‘scandal’ will not get you closer to the people,” says Sven Sauer. So meeting the moribund pictures is here the “spectacular and irretrievable event”.

“An Act of Liberation”

And how will the artists feel about this, when their works will lie destroyed in the yard of the Old Court? Babak Nafarieh: “As an act of liberation. Of course, you grow an emotional connection to the works during six months of work on them. The process of creating stands in the foreground – not the eventual burning at the end.” – But don’t you work with “the handbrake on”, in this case? No, Sauer beckons: “Like you cannot either tell a saxophonist to play only 70 percent.”

Opinions may be divided about whether the whole action is populist or not. However, it is democratic: “We give the power to the visitors: They contribute to the decision on the artworks.” An association to the Nazi book burning is definitely a failed conditioning. Nafarieh: “It’s exactly the opposite: Those who opt for a work will take it home.”

It is interesting that in the previous debates, the topic is rather the final than the exhibition itself. Sauer stays calm: “We expect 50 per cent of ‘disaster tourists’. Something like that develops its own dynamics – As they then say: ‘Are you coming to the burning?’” To channel
this and to satisfiy the right of assembly, only 199 visitors are allowed to entry the exhibition at the same time; because “It could happen shortly after 9 pm that you cannot see the works anymore.”
In this case, the visitors can stock up with food and drinks while waiting till the unsold artworks come into the yard. Sure, it shoudn’t become a party, “But no funeral, either.” says Sauer.

The film-savvy artist has also shot some trailer of this project with the FH (University of Applied Sciences) Mainz. This week, they are shown in the municipal art-house cinema Caligari in Wiesbaden. The Wiesbaden debut of this action is somewhat reminiscent of the art movement called Fluxus, like the destruction of a piano in the Wiesbaden Museum more than 50 years ago. And it shall act as a precedent: Sauer and Nafarieh have already planned follow- on projects with artists in Warsaw and Paris, “All dates till 2017 are fixed”.
And how does “landlord” Stefan Grötecke of “Project 48” see the “Project 360”? “These are really other dimensions. But I became properly aware of the whole thing only when Babak Nafarieh asked me if I actually had an axe, while he was looking at his large format pictures.”