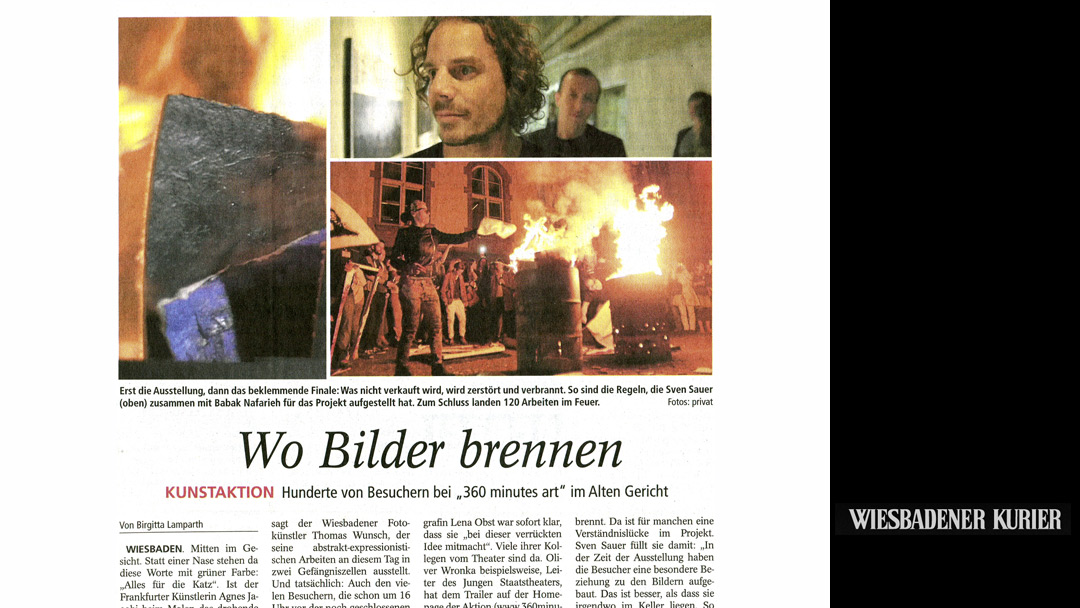 Where Pictures Burn
First the exhibition, then the nightmarish finale: All unsold artworks get destroyed and burned. Those are the rules that Sven Sauer has established together with Babak Nafarieh for their project. Finally, 120 works end in the fire.
ART ACTION: Hundreds of Visitors in “360 minutes art” at the Old Court

WIESBADEN – Right in the face. Instead of a nose, there are these words in green color, “All for naught.” Has the Frankfurt artist Agnes Jacobi become conscious of the impending expiry date of her work while painting? As for the other seven participating artists of the action “360 minutes art”, the rule was: What is not sold during the six-hour exhibition at the Old Court, will get burned in the yard at the end of the show.
“360 minutes art” and not more: Sven Sauer and Babak Nafarieh debuted with this radical concept last Saturday. A concept that is sure to draw from Wiesbaden around the world: Some more events abroad are already planned, and the newest request just came from Seoul. A sophisticated project (and so is its PR) with a guerrilla tactic that has never been so merciless before: Art emerges and can be seen only by those visitors who come to this special event and only during the few hours it takes place. And this art then disappears again. Either with a buyer. Or after the exhibition in the fire.
“But it’s not about the effect – it’s about the images,” says the Wiesbaden photo artist Thomas Wunsch, who exhibits his abstract expressionist work in two jail cells on this day. And indeed, also for the many visitors who already line up at 4 pm in front of the still closed door, it’s about the images. When the opening time slightly delayed, a woman called: “Our time is running out!” Our time – as potential buyer at this special exhibition, you cannot consult your pillow and decide tomorrow – you have to decide now or never.

The artworks showed at “360 minutes art” are works to which visitors look at with a complete different view as usually at other art exhibitions – Thomas Wunsch is sure of that. At this exhibition, visitors look at the works in a more intense, almost existential way. Wunsch can also imagine to participate again as artist at “360 minutes art” in the future: The aim of the project is also growth. Former participants could participate again in new places, together with local artists, so Babak Nafarieh: “This will eventually develop a Documenta in six hours.” Even for the theater photographer Lena Obst it has been immediately clear that she would “Take part in this crazy project.” Many of her colleagues from the theater are there, too. Oliver Wronka for example, the director of the Young State Theatre, has given his voice to the trailer on the homepage of the action (www.360minutesart.com). He finds the action “Super consistent,” because “The images shown at this exhibition aren’t any artworks which get dragged from exhibition to exhibition under the motto: Hopefully someone will buy them someday…”
Buying is not an option for many visitors that evening. The reason are the prices between 660 and 3800 Euros. The fact that 50 percent of the prices go to the artists and 20 percent to the project “360 minutes art” as well as 30 percent to “landlord” Stefan Grötecke from Project 48, annoys some. Altogether, it is discussed a lot on this evening – about art, about value, about disaster tourism. Around 9 pm, one hour before the finale, it gets really crowded. Price reductions do not exist, despite the advanced time: “The value of art gets reduced when one makes special prices,” knows Thomas Wunsch. An hour later, this
art has no more value at all: It burns. For some, there is an understanding gap in this project. Sven Sauer fills it: “In the time during the exhibition, the visitors have developed a special relationship to the images. This is better than keeping them somewhere in the basement. So you have them in your mind.”

About 120 artworks now only live on in memories. 20 others have found a buyer. “That’s a lot for six hours,” says Sven Sauer. His big city impressions, which he developed together with Igor Prosavec under the label “SAPO”, have all been sold. Babak Nafarieh, however, had to burn all his works, “That hurts”. And it hurts also that just before the finale, someone asked him if he could paint one of his exhibited pictures again after the exhibition. But these works are indeed limited, exclusive.
And so there remains a slightly bitter aftertaste in the end. And that comes not only from lots of oil paint in the fire.