“Feeling of Unease About the Art Market” 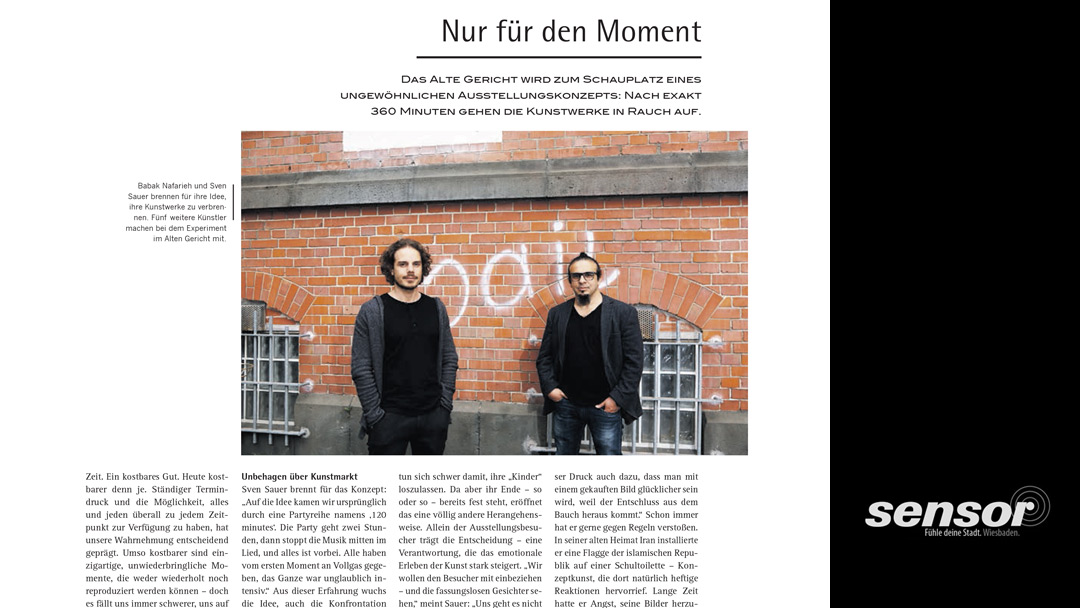 Only For The Moment
The Old Court turns into the setting of an unusual exhibition concept: After exactly 360 minutes the artworks go up in smoke.
Babak Nafarieh and Sven Sauer burn for their idea of burning their artworks. Five more artists participate in the experiment at the Old Court.
Time. A precious good. Today, it is even more precious than ever. Permanent deadline pressures and the possibility of having everything and everyone everywhere at our disposal at any point in time, has crucially shaped our perception. Unique, unrepeatable moments which can’t be reproduced become so much the more precious – but we find it increasingly difficult to go along with such situations. This is precisely the thought that inspired Babak Nafarieh and Sven Sauer for their extraordinary exhibition concept. Together with five other artists, the two Wiesbaden artists show their works on May 17, starting from 4 pm – for exactly 360 minutes. Not a second longer or shorter, the countdown will be counted down by a clock. After that time period, all artworks which haven’t found a new owner will be burnt. Taking photographs and filming is strictly forbidden, as everything shall exist only for this one point in time and space. Also the location plays an important role: The action takes place in the cell block of the Old Court, apart from the usual art galleries.
Feeling of Unease About the Art Market Sven Sauer burns for this concept: “We had the idea from a party series called ‘120 minutes’. These parties have a two-hour time limit, then the music stops mid song and it’s all over; in our experience, everybody there has been on full throttle from the first moment on, the whole thing was incredibly intense.” The idea of charging emotionally the confrontation with art by an extreme limitation of time grew by this special party experience. One thing about the art market has been upsetting Babak Nafarieh for a long time: “When people hear of an exhibition, they often say: ‘Why should I go there now, it takes place for two more weeks. Thus we came up with our idea. We believed everybody would think we were crazy – in fact, we have often heard that. But in a minimum of time we had commitments of many artists who think about that the same way we do.”
The decision should be left to the moment. Thus, the artists can completely detach themselves from their works – whether they will be sold or burned. Many artists have great difficulties with letting go of their “babies”. However, since their end – either way – is already certain, a completely different way of approaching to this procedure opens up. Only the exhibition visitors bear the decision – a responsibility that greatly enhances the emotional experience of art. “We want to involve the visitor – and see the stunned faces,” says Sauer: “We don’t lay the focus on the burning, but on the fact that nothing shall be left behind, after the exhibition.” There is a clear set of rules: All artworks have to be created especially for this project only – it is in no case a sampling of remnants from other exhibitions, and the prices are not less than usual (in order to not protect them from the impending destruction just by favourable prices), haggling is also not allowed. Once the clock reaches zero, every artist burns his not sold images by his own hand.
Of course, the two artists expect a lot of “disaster tourists”, but they are convinced of their concept: “The decision whether to purchase an image or not, is much more emotional. Because it cannot be chewed over for about two weeks,” says Nafarieh, “probably, this pressure also leads to the fact that you will be happier with a purchased image, because in such moments, the decision comes by the seat of one’s pants.” He has always been happy to violate the rules. In his home country of Iran, he installed a flag of the Islamic Republic on a school toilet – a concept art, which of course provoked strong reactions there. For a long time he was afraid of giving away his pictures. The recent rule violation – the destruction of his works – is also a kind of liberation. “360 Minutes Art” celebrates its premiere in Wiesbaden, and it will go further with other artists to Dresden, Munich and Warsaw – but not by any means in Berlin. Nafarieh and Sauer can barely handle all the requests. Apparently they hit a nerve of many of their colleagues. Art only, in the here and now, irretrievably and ephemeral – a provocation, but also an opportunity for our perception.
www.360minutesart.com
Jan-Markus Dieckmann, Pictures by Kai Pelka