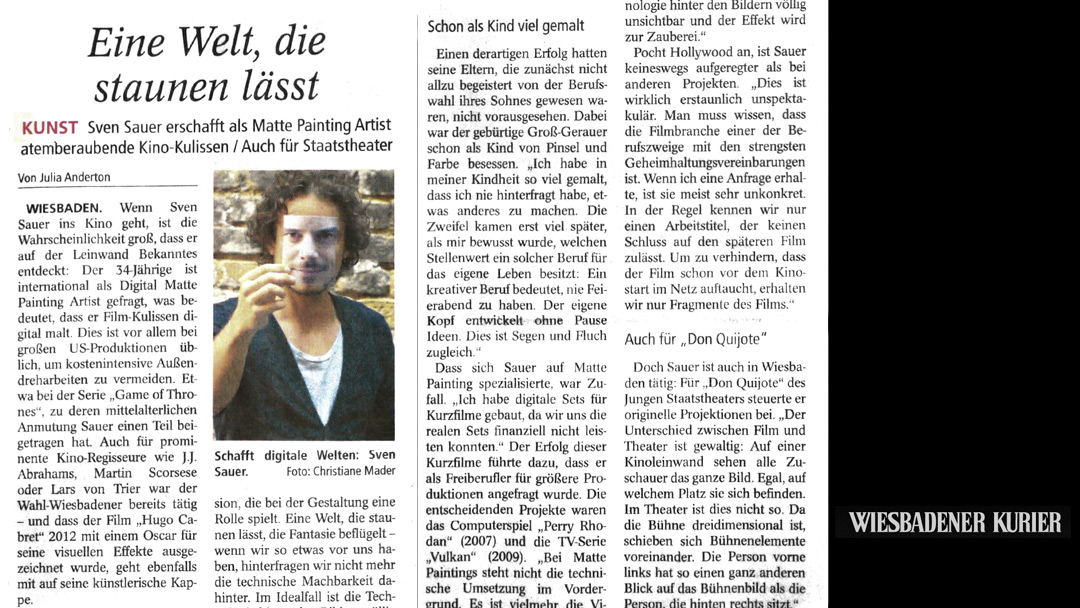 When Sven Sauer goes to the cinema, it is probable that he discovers something familiar on screen: The 34- year-old is internationally in demand as digital Matte Painting Artist, which means that he paints digital movie scenes. This is usual for large U.S. productions in order to avoid expensive outdoor shootings, like for example the series “Game of Thrones”: Sauer has contributed a part to its medieval appearance. Also for prominent theater directors like J.J. Abrahams, Martin Scorsese or Lars von Trier, the Wiesbadener Sven Sauer has already been active – and that the film “Hugo Cabret” 2012 was awarded an Oscar for its visual effects, is Sauer’s merit.

He Painted a Lot as a Child

His parents, who were initially not too thrilled of their son’s career choice, hadn’t foreseen such a success. As a child, the native Groß-Gerauer was obsessed of brush and color. “I painted so much in my childhood that I never questioned myself to do anything different. The doubts came much later when I realized how important it is for one’s live to have such a profession: A creative’s work is never done. The head develops ideas all along without any breaks. This is both a blessing and a curse.”

That Sauer specialized in Matte Painting, was a coincidence. “I have been building digital sets for short films for a while, since we couldn’t afford real sets.” The success of these short films meant that he later was asked as a freelancer for larger productions. The key projects were the computer game “Perry Rhodan” (2007) and the TV series “Volcano” (2009). “Matte Paintings don’t have the technical implementation in the foreground. It is rather the vision that plays a role in the design. A world that amazes, that inspires the imagination – if we have something like that before us, we no longer question the technical feasibility behind it. Ideally, the technology is completely invisible behind the images and the effect of magic.”

When Hollywood knocks on Sauer’s door, he’s not more excited than about other projects. “This is really surprisingly unspectacular. You have to know that the film industry is one of the professions with the strictest confidentiality agreements. When I get a request, it is usually very vague. We only know a working title that allows no conclusion about the movie. We only get fragments of the movie in order to prevent that it could appear on the internet before the cinema release.”

Sauer is also active in Wiesbaden: For “Don Quijote” of The Young State Theatre he contributed some original projections. “The difference between film and theater is immense: On a big cinema screen, all viewers see the whole picture, no matter on which place they sit. In the theatre, this is different. As the stage is three-dimensional, the stage elements push themselves before each other. So the person sitting left in the front has a very different view of the stage as the person who sits right in the back.